I feel like Rip Van Winkle this week- I have spent so much time sleeping that the week just flew by! I can’t seem to keep my eyes open most of the time so I’m hoping this is just a phase. We have been particularly busy this month so that may be contributing, but I am still just so.tired. {If you’re a regular reader, you may have noticed the lack of posts- I keep falling asleep before I can write them!} 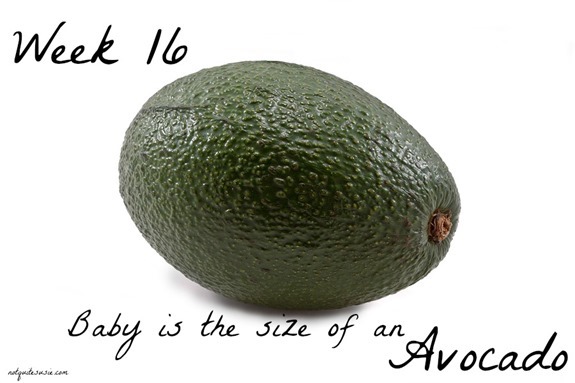 Get ready for a growth spurt. In the next few weeks, your baby will double his weight and add inches to his length. Right now, he’s about the size of an avocado: 4 1/2 inches long (head to rump) and 3 1/2 ounces. His legs are much more developed, his head is more erect than it has been, and his eyes have moved closer to the front of his head. His ears are close to their final position, too. The patterning of his scalp has begun, though his locks aren’t recognizable yet. He’s even started growing toenails. And there’s a lot happening inside as well. For example, his heart is now pumping about 25 quarts of blood each day, and this amount will continue to increase as your baby continues to develop.

Movement: I feel it more every day, but it’s still not constant or anything. It often catches me off guard since it’s so few & far between that I won’t be thinking about it. It’s funny because even though it’s been four years since I was pregnant last, I am still in the “habit” of putting my hand to where the kicks are to try to feel them from the outside, even though I know it’ll be weeks before I can feel this one. I used to spend so much time feeling Shane’s kicks though that it just became second nature!

Symptoms: I feel like these posts have become a way for me to jinx myself- whenever I write that I’m over the sickness, I spend the next week sick, or when I say I have my energy back, suddenly I can’t keep my eyes open! The latter has been the case this week and I have really, really struggled to stay awake. I’ve been taking naps almost daily & still going to bed early! It’s killing my productivity.

On the plus side, my nausea was mostly better this week. Still there, but for short periods of time instead of all day. So of course now that I’ve said that, I’ll spend next week sick but bouncing off the walls.

Cravings: Salad! &It’s one craving that I’m happy to indulge.

Food aversions: It varies on a moment by moment basis. I actually have plans to make {chicken} burgers this week, something I couldn’t even be in the same room with for the last 8 weeks. That said, there are still moments when the thought alone makes me gag so we’re going to have to time it well.

What made me cry this week: Nothing that I can think of.

Something I am excited about: Not much is happening on the baby front right now. I have other stuff that I’m excited about {Shane starting school, etc.} but right now there’s nothing baby related coming up for awhile.

Something I am not so excited about: Again, I’ve got nothing! I am super boring this week. But nothing happening is typically a good thing during pregnancy so I’ll take it.

Baby purchases: Nothing this week! Shane got some Toys R Us gift cards for his birthday so I am planning a trip there and might encourage Shane to pick something out for the baby {but not from his birthday money, of course!}.

Shane’s Thoughts: Shane is still really excited but has finally stopped asking if the baby is going to come out every day. He’s been a bit forgetful as far as needing to be gentle with me right now, so we keep having to remind him. Daddy first explained it weeks ago as needing to play with me like I’m a gentle flower {totally corny, I know, but it’s the best way we could think of to explain “gentle” to a then-3-year-old} so now he keeps telling me he can’t wait until I’m not a flower anymore. Silly boy.

How did you put some pep in your step when you were expecting?