This shop has been compensated by Collective Bias, Inc. and its advertiser. All opinions are mine alone. #InsideOutEmotions #CollectiveBias

I don’t know about you guys, but I never stopped loving kid movies. I love them all, but I especially love the ones from Disney & Disney/Pixar- they are always so smart, with hidden Easter eggs, pop culture references, and the occasional joke that will go right over the heads of little ones.

That’s why I’m so excited that Inside Out is finally here! I’ve been dying to see it since I first heard about it and with every new commercial or trailer it just looks better & better! While we haven’t had the chance to see it yet, we are so excited about it that we threw an Inside Out party last week!

The cupcakes were so much easier to make than I thought. I imagined having to do some complicated frosting trick mid-baking, but really all you have to do is bake cupcakes like normal, then use a spoon or knife to dig out a little hole in the center of the cupcake, while attempting to keep the piece you take out in tact. You don’t want to go all the way down to the bottom, but rather stop about 2/3 of the way in. Then, just use a spoon to scoop some frosting in, and then close it back up with the piece of cupcake you cut out. Then just frost the top like normal and of course, add some sprinkles!

I decorated the table with lots of Inside Out goodies- the exclusive plush characters that you can only get at Walmart, some cute figures that I found, and even a stack of coloring pages {you can get yours for free here} with some markers. As a party favor, we picked up those to-go coloring packs- we found a whole display of Inside Out ones at the store and they were perfect! 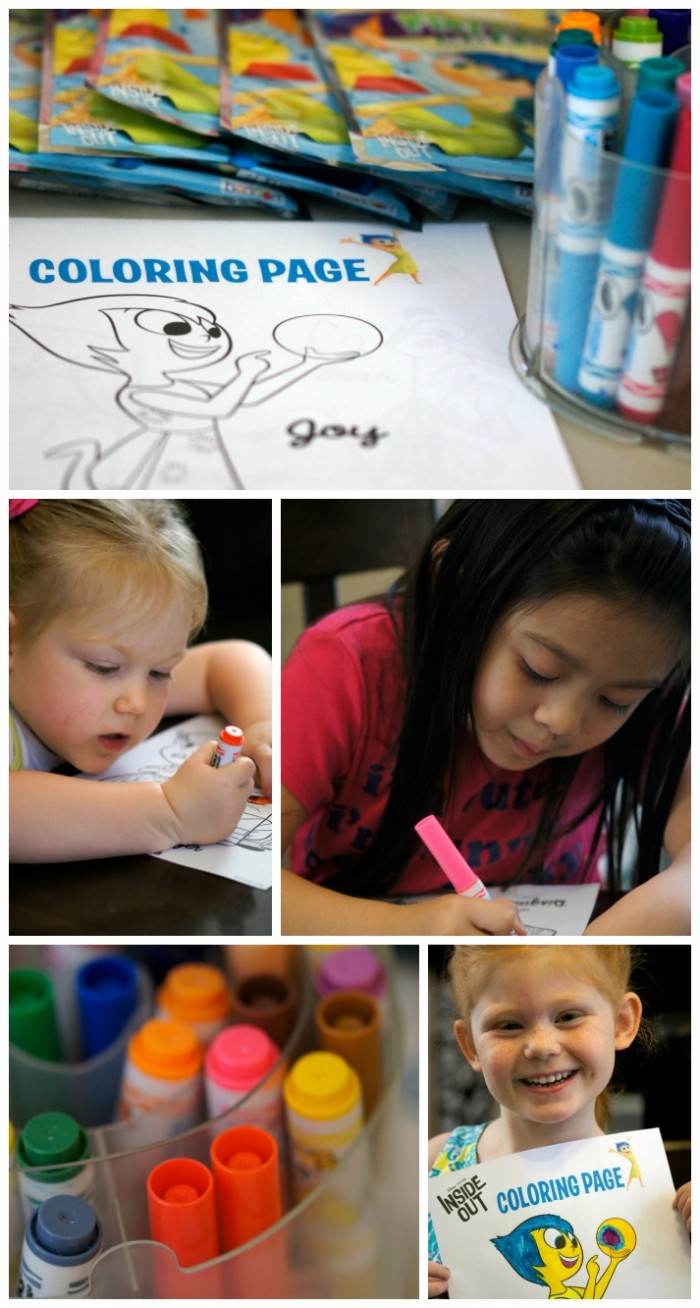 When the kids arrived, they immediately ran to the table and started asking about the characters. Our party was the day before the movie came out, so no one had seen it yet- and everyone was asking over and over when it would come out! I told them everything I knew about the movie and they were really excited to go see it.

After they had their fill of fruit, wraps, and inside-out cupcakes, everyone played outside {my original idea was to have the whole party outside- to bring the party from the inside, out- but it was 110 degrees outside} and colored pictures of the characters! Some of the littles got a bit distracted and somewhere along the way Zac lost his shirt.

The kids had fun eating the Inside Out fruit snacks- they would act out each emotion before they ate it! It was so funny to watch their silly faces go through the whole range of emotions. 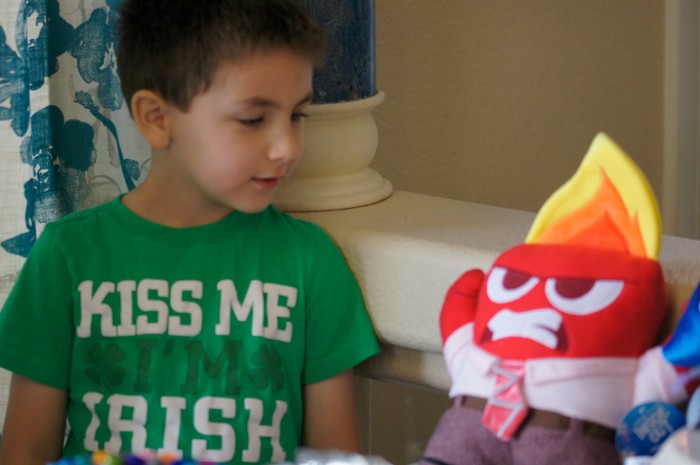 One cool thing that I’ve noticed- both during and since our party- is that playing with the exclusive plush characters makes it easier for kids to talk about their emotions. Shane always hides his emotions, and it’s so hard to see him trying to hold it all in when you can clearly see that he’s upset about something. When kindergarten ended a few weeks ago, it was like pulling teeth to get him to admit that he’d been acting out for a few days because he was scared to leave his class and become a first grader. Since we’ve had the plush characters, though, Shane has been bringing me the emotion-appropriate one each time something happens to him or someone else! Last night, he brought me Sadness when the dog ate Zac’s snack, and the other day he brought me Joy when I told him we were going to the museum!

Have you seen Inside Out? What did you think?