Disclosure: Post sponsored by Disney/Walmart but all opinions are my own. See below for more information.

Last week, on a random Thursday afternoon, the stars aligned. We had a two-hour window where our babysitter {aka my mother-in-law} was free, Justin wasn’t working, the baby didn’t need a nap, and Shane was out of school. We took the opportunity to go see Guardians of the Galaxy- finally! I think it might just be Justin’s new favorite movie, and it’s definitely at least one of my favorites as well.

The movie has a lot of action, but it also has a lot of laughs. Despite having a serious storyline, the whole movie was a lot of fun- just like the line of Guardians of the Galaxy toys at Walmart! There are a whole bunch of great toys available, but some of my favorites are below!

Star-Lord is definitely my favorite character. He’s hilarious, he’s skilled, he has a very interesting back story, and of course, he’s played by Chris Pratt. Put that all together and you have the perfect action hero! For fans of Star-Lord, I recommend the Platinum Series Star-Lord Figure 6″ Action Figure, Milano Starship Vehicle, and Star-Lord Battle Mask And Blaster Set. 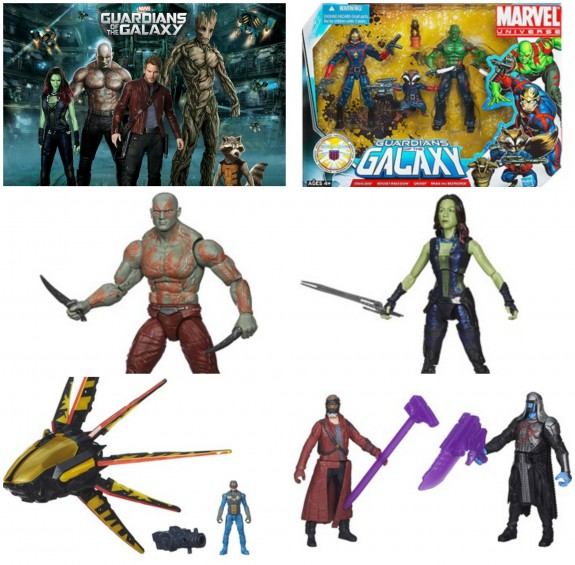 Now, if you want to have a big adventure, you’re going to need more than one dude & one raccoon! For those who want to expand their play {or who just like characters other than Star-Lord and Rocket the most} there are plenty of other choices, like the Gamora Figure 6″ Action Figure, Drax the Destroyer Starlord Rocket Raccoon and Groot Set, Platinum Series Drax Figure 6″ Action Figure, 2-Pack Star-Lord And Ronan Action Figures, and Nova Corps Starblaster Vehicle.

If you have a little one at home who would love some of the new Guardians of the Galaxy toys, be sure to head to Walmart.com or your local Walmart to pick up a few goodies! You can also enter to win a gift card to Walmart to help you start off your collection- enter with the widget below!

The Guardians Of The Galaxy At Walmart $25 Gift Card Sweepstakes

Who is your favorite Guardian?

Disney and Walmart partnered with bloggers such as me for their program. As part of this program, I received compensation for my time. They did not tell me what to purchase or what to say about any product mentioned in these posts. Disney and Walmart believes that consumers and bloggers are free to form their own opinions and share them in their own words. Disney and Walmart policies align with WOMMA Ethics Code, FTC guidelines and social media engagement recommendations.