I love talking dog movies, but when they aren’t done right, they can be a disaster. Since the movie has to be made in a way that you can trick your mind into believing that dogs can actually talk, it takes a whole team of professionals to make that happen.

A couple of weeks ago I was lucky enough to have the chance to attend a Q&A session with three of the people who had huge roles in making this happen for Beverly Hills Chihuahua 3: Viva La Fiesta! The speakers included Director Lev L. Spiro {left}, producer Sara White {right}, and animal trainer Mathilde DeCagny {center} with Birds and Animals Unlimited of Hollywood, the company that trained all of the dogs used in the movie!

We got some insight into the stars of the movie- Rusco, who plays Papi, and Angel, who plays Chloe! It turns out, Angel really is kind of a diva on the set! She nipped at Rusco while they were filming one of the other movies, and didn’t like to come out onto the set until all of the other dogs & people were on the set. She has earned her divaness though as she is so good at her job, she never even used her doggie double! {Rusco only used his once, so he’s pretty impressive too!}

It’s hard to coordinate so many dogs at once, so all of the blocking {actions & placements on set} are done months in advance so that the trainers can work vigorously with their dogs for months before actually going to the filming. They taught the dogs everything they needed to know before even setting foot on the set in order to make filming go faster & smoother- and it worked, as the entire movie was filmed in only 26 days! 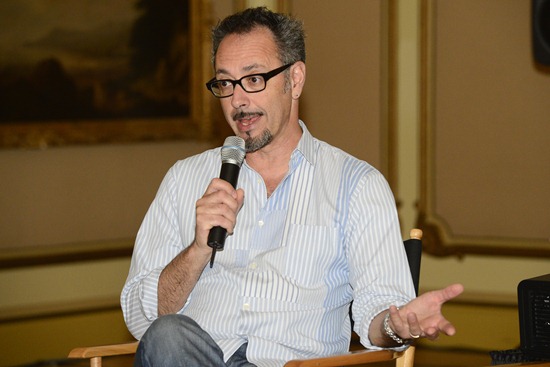 Dogs are just like people in that they need breaks. The longest the dogs film in one day is 12 hours- although sometimes those are odd hours. During the scene where Rosa is in the pool, they were filming that at 3 AM- and the dog who played Rosa wasn’t a fan of water or 3 AM so she tried to nip Lev! Could you blame her, though? The last thing I want to do at 3AM is go swimming!

Lev said that the hardest thing for him about directing a dog movie was that it’s hard to get over-the-shoulder shots since you have to have somewhere to hide the trainer that is getting the dog to do what is needed. Especially in the scene that had every dog in it {all 27 of them!} he really had to get creative to hide everyone! He definitely pulled it off, though.

Since most of the bloggers in attendance had pups {myself included of course!} we were thrilled to have the chance to ask the dog trainer all of our questions about what it’s like to train movie star pups! Since 95% of the dogs used in the film were rescues, we wondered how Birds and Animals Unlimited of Hollywood chose their dogs. Mathilde said that they look for outgoing dogs & like to use dogs who are already 1 or 2 years old since by then they have a distinct personality & you can see if they have an eagerness to learn & if they are outgoing. She said that there is no difference between using a rescue dog vs. a non-rescue and that they don’t worry about the dog’s past as long as their personality fits what they are looking for. As someone who has rescued all of my pups, I love that they make the effort to rescue dogs and give them a second chance with the company, which is really more like a family for the animals since they actually live in the trainers’ homes!

They use lots of treats & toys to encourage the dog to pay attention & do the trick and once the dog has had a bit of training they can use “real” tools like a look stick {which looks almost like a tennis ball on the end of a stick} to get them to move their head & look where they need to as well as a mark {which is a small black circle} that tells the dog where to go to sit or stand.

It takes a lot of hard work to make such a fun & entertaining movie, and it was really cool getting a bit of behind the scenes info! Just a few more quick facts:

-Lev L. Spiro {Director} loves dogs and wanted his own dog, Zuma, in the movie, but knew that it’d probably eat the little dogs. So instead, he used photos of his dog in the movie like on the cover of “Better Dogs & Gardens”. He said that Zuma is featured 8 times in the movie so keep an eye out & see if you can find all of the instances!

-One of the characters, Arnie, was originally a talking dog but ended up becoming mute as filming went on because it is very expensive to make a dog look like it’s talking & they were reaching their budget. Personally, I think it works better that he’s a mute anyway!

-Pedro {played by Zeus}, the smiling pitbull, was the sweetest of all of the dogs on the set.

-The Mastiff who acts as the bellhop & server in the movie also played Marmaduke! Keep an eye out for him in a few of the scenes.

-Each dog had their own trainer on set.

If you or your kiddos love dog movies as much as I do, you don’t want to miss Beverly Hills Chihuahua 3: Viva La Fiesta!

Note: Disney paid for my travel & accommodations in order to cover this event. No other compensation was received. All experiences are authentic & all opinions are my own.