Since Shane’s 1st Birthday, Fisher-Price Little People have been a part of our everyday life. From the barn to the airport to the car wash, we have a whole city in our playroom. They’ve helped Shane learn about people and places, and now they’re helping Shane learn about animals!

The Fisher-Price Zoo Talkers Animal Sounds Zoo is the newest playset from the world of Little People- and we’re obsessed.

The zoo has a lot of great features, including the ability to play on both the front and back sides {which is awesome, since Shane makes me play, too}. But the main feature? The platform that brings your animals to life! Place any of the animals that come with the zoo {or the ones sold separately- more on that in a minute} and the zoo will say their name– AND what sound they make! It’s really fun and educational– Shane now knows the difference between a “monkey” sound and a gorilla sound.

There are lots of fun things for your animals to do at the zoo- they can go down the slide or ride in the tree swing, or you can push the lilly pad to make the pond come to life with the sounds of a hippo and a babbling brook!

Now about the animals- they are addicting. The zoo itself comes with a gorilla, a polar bear, and a lion. But there’s also a whole slew of them that are sold separately- many of them are sold by themselves & are about $3, but three of them are sold with a book and are $6 each for a book and animal set. Then there’s the giraffe and lion cub, which you can only get with the Safari Truck. We have them all except one animal, because the store is always sold out of it {the alligator}. 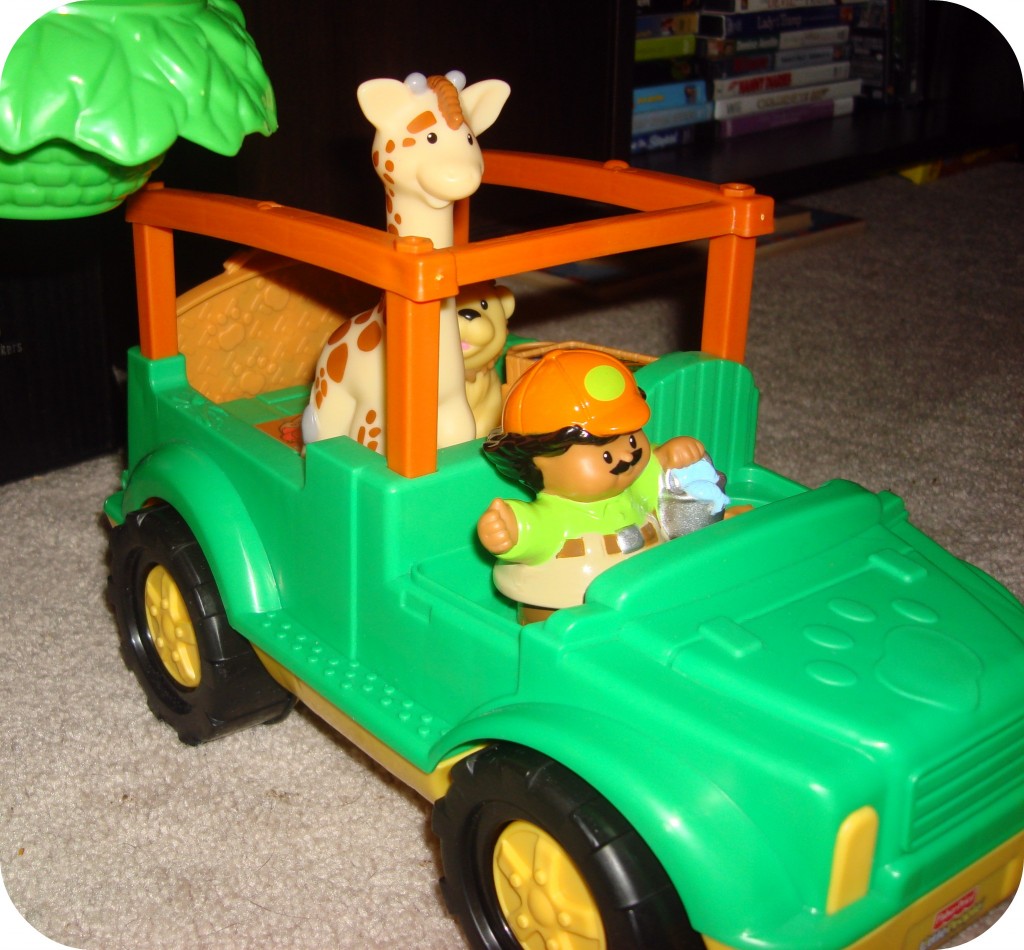 The animals are so cute & it’s fun to hear their sounds, so we wanted all of them. &If more are released, you bet we’ll get them, too!

In fact, the ONLY flaw I see with this whole set is that there is no chimpanzee available. Why would that matter? Well, first, on the product image on the box, it shows a chimp instead of a gorilla being included. This led to my Mother-in-law buying a gorilla at the same time as her zoo set, since she didn’t know there was already one included- so now she has two. Not a big deal, but that’s $3 that didn’t need to be spent. Secondly, the zoo comes with a super cute DVD, which Shane calls “Movie Zoo” {&makes me watch multiple times a day} that has a cute story about the chimp at the zoo. &Third, like a true collector, I feel incomplete without that chimp. I have no idea why there’s no chimp, but I hope they decide to make it!

We are so in love with this zoo! You’ll love it because it’s educational, fun and encourages imaginative play.

All you have to do is get a video of your child aged 1-5 making their best animal sound, submit it via the iPhone App, Android App, or on the contest’s website, and share the link with friends & family so they can vote! The winner will receive a $10,000 cash prize and a trip to Fisher-Price headquarters in East Aurora, N.Y. for a special photo shoot and an opportunity to have their child featured on a Little People® toy package or website! Let me know if you enter so I can vote for you!

The Zoo Talkers Animal Sounds Zoo retails for around $40 and can be found at mass retailers or from the Fisher-Price store. Also check out the Zoo Talkers website for fun & games including coloring pages and puzzles!

Susie’s Note: I received a Zoo Talkers Animal Sounds Zoo to facilitate this review. All opinions are my own. &I bought all the extra animals & the truck on my own because I am addicted. It’s a problem.