Like pretty much everyone in the last {almost} century, I grew up on Winnie the Pooh. I had a collection of all the friends from the Hundred Acre Wood and every morning, I used to grab them and sit them on the couch next to me as we watched reruns of The New Adventures of Winnie the Pooh. I loved Pooh and friends so much that I even named the intersections by my childhood home after them- I sobbed when we moved and I had to say goodbye to Pooh Corner and Tigger Corner!

Fast forward to now, when I’ve grown up {at least according to my driver’s license- whether I actually have is up for debate} and there’s a brand new movie coming out from the world of Winnie the Pooh. While most of the Pooh Bear shows, movies, and books in the past have focused on the “Silly Old Bear” himself, this movie has a new twist- it focuses on Christopher Robin! Like me, he’s grown up- but when his childhood friends need his help, he goes back to the familiar Hundred Acre Wood to help Pooh Bear. Then, Pooh and friends come to our world to help him!

In the heartwarming live action adventure Disney’s “Christopher Robin,” the young boy who embarked on countless adventures in the Hundred Acre Wood with his band of spirited and lovable stuffed animals, has grown up and lost his way. Now it is up to his childhood friends to venture into our world and help Christopher Robin remember the loving and playful boy who is still inside.

Christopher Robin is hitting theaters in August 3rd and to celebrate, I made these super easy mason jar vases! One features Pooh and his adorable little face and the other is, of course, a “Hunny” pot! These were so easy to make they almost don’t even really need a tutorial, but if you’d like one it’s below! 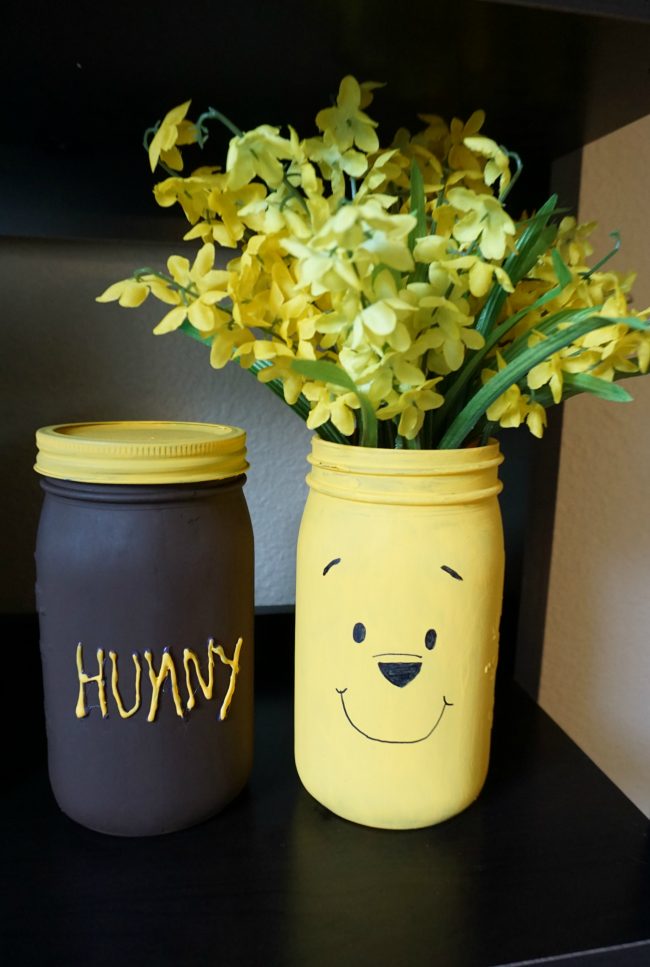 Paint the mason jar with the matte yellow paint- you will likely need to do a few coats to get it to stick to the glass and to get rid of streaks. I think I did 3 or 4 coats with the yellow, while spot-checking along the way. The first layer will likely just get all over the place- this is totally fine! Just let it dry a little bit and paint a better layer over it, as it’ll be easier with that first layer there for it to stick to.

Paint the mason jar with the brown paint and do multiple layers as necessary for full coverage. Paint the mason jar lid yellow- this can get messy as the paint doesn’t love to stick to the metal, so cover your work surface first! Do not attach the lid until the paint has dried on both the lid and the jar itself.

Once the lid and the jar are dry, use a hot glue gun to trace the word HUNNY on the jar- bonus points if you make one of the N’s backwards like Pooh has a tendency to do. Using a small paintbrush, use upward brushstrokes {trust me on the upward part- I don’t know why it matters but it does} to paint the word yellow.

You can use these however you want- I used Pooh as a flower vase and added some of my favorite Winnie the Pooh quotes into the Hunny jar for us to read when we need a little inspiration! My favorite? “You’re braver than you believe and stronger and smarter than you think.” I think we all need that reminder sometimes! I think I’m going to switch out the quote in that frame to one from the Hundred Acre Wood, too- there are so many great ones to choose from!