Last month at the D23 Expo, an insanely large group of Marvel superheroes united on stage. There were so many heroes, they could barely fit on the stage! It was our first glimpse at just how epic Avengers: Infinity War is going to be when it comes out next year.

While we haven’t seen many of those actors donning their capes, suits, or otherwise superhero-worthy attire in awhile, two of the peopleon the stage have a movie that just came out this summer- Karen Gillan {Nebula} and Pom Klementieff {Mantis} from Guardians of the Galaxy, Vol. 2- and after the panel, they met us backstage for an exclusive interview! After getting to walk backstage at D23 Expo, we came to a private room where we were able to chat with Karen and Pom about their characters, the makeup process, and more!

How did you ladies love the reception you just got on stage?

Karen Gillan: Oh, it was amazing.

Pom Klementieff: It was incredible, yeah. I mean, I think it was 7,000 people.

Karen Gillan: It felt electric to have like 7,000 people passionate about something that you’re involved with in some way, and it’s just like totally different sensations to anything I’ve ever experienced.  It felt electric.

Can you tell us anything about the film you guys are working on?

Karen Gillan: Well, I wish we could. What can we say about the film?  Not very much, because they’re so secretive and I didn’t even get a full script, so I’m just shooting scenes that I don’t know what the context is, and where it fits into the story.

Pom Klementieff: Yeah, I have to harass them every day to get the script, and then I can read it and then I have to give the iPad back. There’s a password and it’s really secretive.

How is it different working with Russo Brothers versus James Gunn?

Karen Gillan: It was interesting, we had to adapt. We’ve only ever made anything Guardians related with James Gunn, and he created these characters and it was very much a collaboration with James in terms of bringing these characters to life. So then to sort of work with completely new directors was a different sensation, but it was also cool because they have something else to add to the table, another perspective on everything.

Pom Klementieff: I was kind of scared at the beginning because we have a great relationship with James Gunn, and he’s an amazing director and he’s really close to his actors.  We created this character together, so how is it going to be to work with someone else?  Am I gonna do the right things?  So I was kind of like a little bit stressed out, but actually when we’re on set, it went really great, you know, and they’re really amazing and they really complete each other.  I mean, it was incredible to get to work with these, incredible actors, you know, Robert Downey Jr., Chris Hemsworth… best gig ever.

How were the fans with you when they found out that [SPOILER!] your character [Nebula] turned good?  Were they nicer to you on Twitter?

Karen Gillan: Well, no one was really mean to me.  I think maybe children are less scared of me now, because sometimes their parents would be like do you want a picture with Nebula, and they’d be like, “uh…” but now they’re willing to take pictures with me, so I’m happy.

Pom Klementieff: It happens not long after Guardians 2, so it’s not like she evolved that much.

Karen Gillan: I feel like your character has to face a lot of her fears, because you seemed like you were nervous to do things in the film.

Pom Klementieff: Yeah, it’s true, like my character in real life.  I was upset.  I was like, I don’t think I can do it.  And my lines were kind of the same, “I can’t do it.”  And then I did it, and it worked out well. She has a new family, I mean, by the end of the movie [Guardians of the Galaxy Vol. 2], she has a family and it’s something that she didn’t know before. 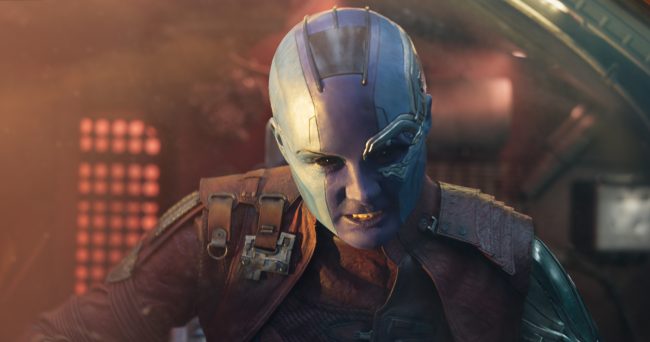 Karen, in your character, are we going to see any more vulnerability?

Karen Gillan: Definitely, yes.  This story very much revolves around her father and everybody has an agenda to deal with her father, but I think no one more than Nebula, because of all of the torment that he’s clearly put her through.  So this is going to be like almost like an emotional explosion for her, I think.

What is your favorite part of your character?

Karen Gillan: I really like the fact that my character can fight so well, and I really like that she is just like riddled with rage.  I mean, it’s just overflowing, and it’s just the most rage ever. She’s got serious daddy issues.

Pom Klementieff: I love her innocence.  It’s kind of refreshing, and it brings a lot of funny moments, too, because she doesn’t know.  She tries things and she discovers things and it’s kind of funny to play, you know.  It’s like an animal a little bit. 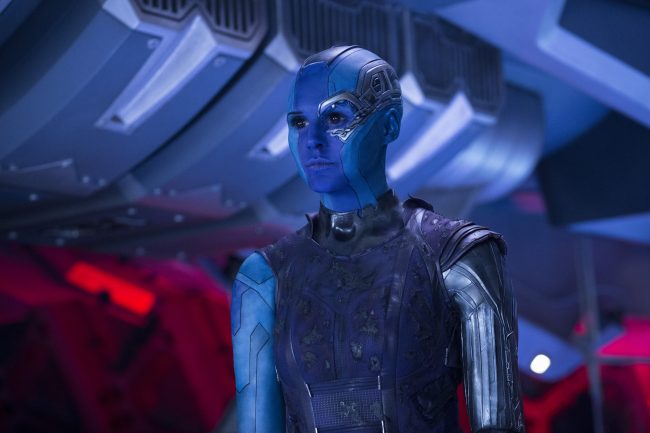 What has been your biggest challenge for either film?

Karen Gillan: The biggest challenge for me is probably the makeup process, because it’s really intense.  It takes about 4 hours in the morning to get ready, I get up at two or three o’clock in the morning and go there, and then they stick skin on my face.  But it’s so cool, the way I turn out, that it’s so worth it, but it’s a challenge to get up at that time and go through that on a daily basis.

What is it like to get the makeup off?

You can find both actresses in Guardians of the Galaxy: Vol. 2, which comes out on Blu-ray this coming Tuesday, August 22nd!