Last week a lot of you said that you didn’t mind my wedding photo spamming, and while I know you were totally just saying it to be nice, I’m running with it. But this week, to switch it up a bit, I’m featuring photos of Shane!

Shane was as excited as we were about Mommy & Daddy getting married and was so excited to get his tuxedo that matched Daddy’s and to be our “Ring Bear”! He did an awesome job & while I was nervous as to how he’d do throughout the evening {with the crowd, the noise and how late it was} he was completely perfect.

My boys look so dapper in their matching tuxes! We had every detail on their outfits match, from their flowers to their ties to their tuxes. 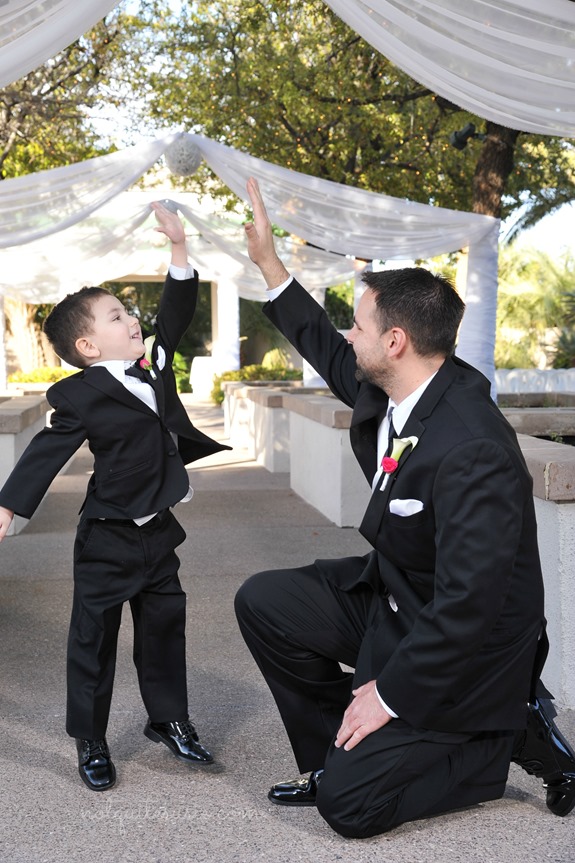 Justin’s family- now officially my in-laws! {Though we’ve considered each other in-laws for years.}

Shane was definitely the cutest groomsmen- sorry, boys! {See that tall, skinny dude on the right? That’s my little brother. Apparently he got the good genes.}

My turn! He was looking at me so sweetly. Love this kid.

Shane got to walk down the aisle with our Junior Bridesmaid, my niece, Kali! She did a great job all night of getting him to do what he needed to do.

Such a happy kid!

We pulled Shane in mid-way through our First Dance so that it could be a family affair {and also because having people watch us for that long was awkward for all parties}.

After the toasts, Shane wanted to have his turn! He actually requested the microphone & gave his own version of a toast. He wasn’t sure what to say so he said “Okay” about fifteen times, before saying “I love you” and turning off the mic {but holding it hostage for awhile after}.

While Justin & I were definitely excited to celebrate our love as a couple, Shane is the physical manifestation of that love & since we love him more than anything, we were so excited to have him play such a big part on our special day.

Did you have a ring bearer?

Psst: Shopping for an engagement ring for your own little ring bearer to hold? Check out DiamondQueensland.com.au!