This post is sponsored by Kohl’s. I received the included Carter’s clothes as compensation.

This year, Shane is entering third grade! Very soon after that, Zac will begin a “School Skills” class that lets him learn the things he needs to know to make him successful in preschool, since he’ll be enrolling next year. Since both kids needed a lot of new clothes {they both grew so much this summer!} we went to Kohl’s to pick up some clothes from one of our favorite brands, Carter’s!

Zac is really into picking out his clothes these days so he came along to the store with me. He had a lot of opinions about his clothing {including that he could not, in fact, wear the 2T clothing he fits into because he’s 3} and he found so many things that he just had to have! He also helped me pick out some clothes for Shane, too.

The boys were so excited about their new clothes that they couldn’t even wait until school actually started to wear them! First, they had to wear their matching “mountain shirts” when we went hiking at Mt Charleston.

Then we had to put some of their clothes up to the “play test”. We headed to the park and the boys ran wild! 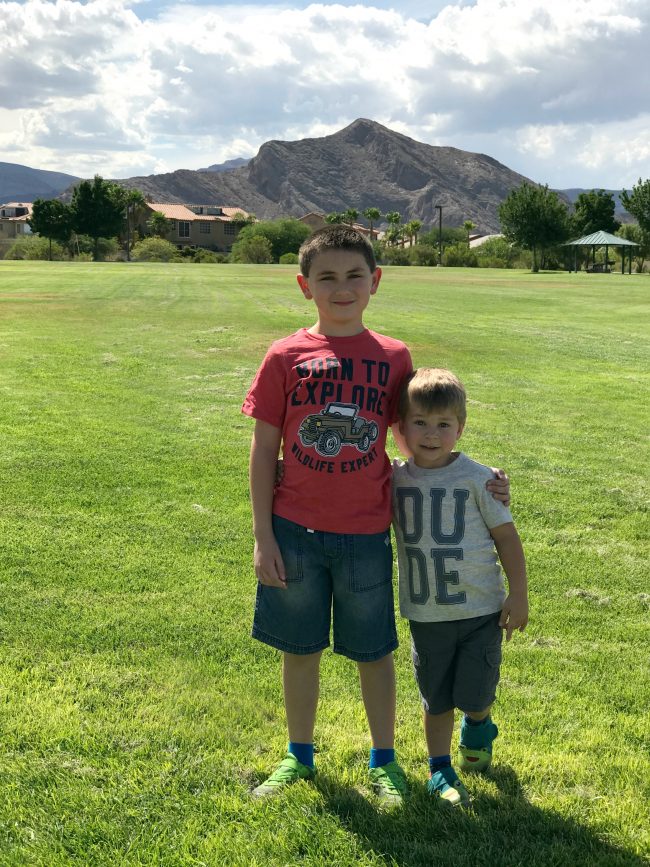 Finally, I had Shane test out one of the first day looks and it was perfect! It was comfy enough for him and he even wore the outfit the other day when we took a walk past his school {it’s practically in our backyard, so we’re there a lot.} It was so exciting knowing that in just a few days, that empty playground will be full of his friends again!

I’ve been buying my kids Carter’s clothes since before they were born and I love that even though Shane just turned 8, he can still wear their clothes. They fit him so well and I know from lots of experience that my boys can really put them to the test and they’ll stand up to anything. I love that Kohl’s carries a large variety of Carter’s clothing in-store so that my rapidly growing boys can try them on before I buy them, but you can buy them online, too. They also carry Carter’s clothing in Shane’s size, while not many stores do, so it was awesome being able to buy for both kids at one store!

Affiliate links are not associated with Kohl’s.