If you’ve been reading for awhile, you may remember all of the exciting things that I got to do when Frankenweenie came out. I attended the premiere of the movie in LA and watched it for the first time in the same theater as the stars of the movie, including Winona Ryder, Charlie Tahan, Atticus Shaffer, Robert Capron, Martin Short, Catherine O’Hara, Martin Landau, and even Director/Creator/Writer/Producer Tim Burton. So I’m probably more excited than most that the movie is finally out on Blu-ray- it’s like my own souvenir from my adventure!

From Disney and creative genius Tim Burton (“Alice in Wonderland,” “The Nightmare Before Christmas”) comes the hilarious and offbeat “Frankenweenie,” a heartwarming tale about a boy and his dog. After unexpectedly losing his beloved dog Sparky, young Victor harnesses the power of science to bring his best friend back to life—with just a few minor adjustments. He tries to hide his home-sewn creation, but when Sparky gets out, Victor’s fellow students, teachers and the entire town learn that getting a new ‘leash on life’ can be monstrous.

You can read my original review of Frankenweenie, but the DVD release has so much more to discover! I recently received the 4-disc combo pack, which includes a Blu-ray 3D, Blu-ray, DVD & Digital Copy. This combo pack includes great special features, including:

• “Miniatures In Motion: Bringing ‘Frankenweenie’ To Life”—Viewers get an in-depth
tour of the London set that includes never-before-seen footage showcasing the
hundreds of artists who worked on the film.

• “Frankenweenie” Touring Exhibit—Allows audiences to explore the artistry of the
film’s puppets, sets and props in a showcase that’s traveling the world.

Shane has loved Sparky since I came back from my trip with Sparky & Persephone stuffed animals & a storybook that we read nightly for a month. While he loves the character of Sparky, he’s still too young to actually see the whole movie as it’s really geared towards kids that are closer to 6 or 7. That said, I’d be fine letting Shane watch 85% of the movie & just fast-forwarding the rest, but he knows the movie is scary so he’s the one who has decided not to watch it yet. In the meantime, he’s been having fun with the free printables I gave him! 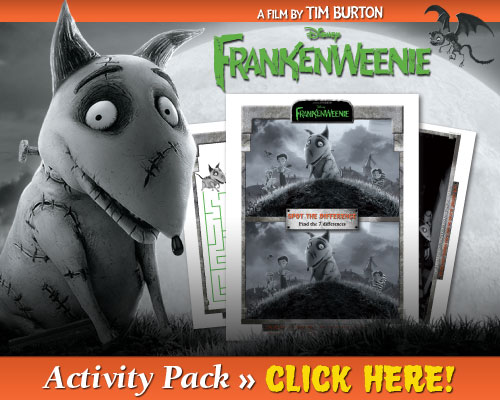 I am planning on watching this movie with Justin for an at-home date night one weekend soon though since I love the movie & would love an excuse to watch it again. We just have to make sure we have plenty of tissues in the house!

&Don’t forget to recycle any old kids DVDs to musicMagpie.com– a great way to get rid of your DVDs if you would like to upgrade to Blu-Ray, whilst also making some cash!

Note: I received a copy of the combo pack to facilitate this review. All opinions are my own.