I know I’ve mentioned this about ten thousand times, but I live in Vegas. It is HOT here day & night- the low for tonight {at 4am} is 84 degrees & while tomorrow’s high is a “cool” 101 due to thunderstorms, we’re usually much closer {or above} the 110 degree range.

So you can guess how unhappy I am that our air keeps going out on us.

It started in May, when it started pushing out hot air. We called our home warranty company & they sent out a company that filled our unit up with Freon & called it a day. They said that other than being low on Freon, our unit was in great condition, so we had high hopes. That worked for few weeks, but then a couple of weeks ago, it shut off completely. It was late afternoon & so we couldn’t get anyone to come out, so we had to go stay at my in-laws because it was just so uncomfortably hot- almost 90 degrees inside, which feels way hotter than outside since there’s no breeze & every light emits even more heat.

Someone came out & fixed it the following day- he said something about the fluid {not the Freon- some other fluid} being low & causing something else to break. It had been working fine- until today, when it stopped working again. &Of course, it happened late afternoon on a Sunday, so we couldn’t get anyone out. This time, the breaker keeps popping- we checked it the first time the air went off, saw it was broken, then reset it. Twenty minutes later, repeat. &Twenty minutes after that, repeat. We’ve decided to just leave it be since it’s not cooling down enough in between to make going outside in the middle of the night worth it, but right now that seems to be the culprit. It’s only 83 in here now because it’s after midnight, but when I wake up, I’m expecting it to be close to 90 again unless we get lucky with the thunderstorm. All I can say right now is thank goodness we had ceiling fans installed! 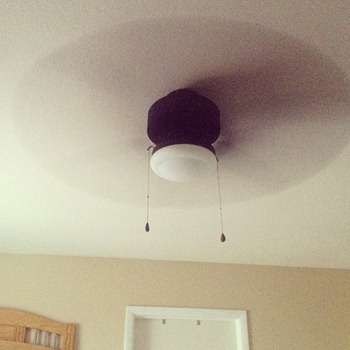 Anyway, why am I sharing this? Mostly, I just want to vent about it because it’s super annoying & being hot makes me whiney. But I’m also wondering if by some chance anyone out there knows anything about air conditioning {or knows someone who does} & has any advice for us. We’ve had three separate companies out already, and yet it keeps breaking. Each company has said that our unit was in good shape, so I’d hate to spend the money to replace it but right now we are so desperate for cool air that we’re considering it. So if you know anything, let me know!!!

Have you had an appliance that gave you trouble no matter what? What happened?