0shares
Today’s Saturday ShaneFest is a special edition one! {New to Saturday ShaneFest? Check out the first one here.} However, for this post I’m introducing something new: the NSFF button. Like the NSFW button, the NSFF button means Not-Safe-For; the second F however stands for Friends&Family. This button will be found on posts that I would rather my real-life friends & family not read due to the amount of disclosure involved. They’re more than welcome to read anyway, but I would like to warn them that when they see this button, there’s a good chance I’ll be talking about bodily functions, painful memories, or lady bits. You’ve been warned. 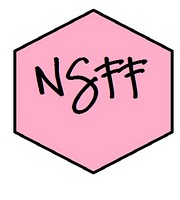 &So without further ado- on to…
Saturday ShaneFest: Out of the Womb
As of today, Shane is 37 weeks and 2 days old.
I was pregnant with him for 37 weeks and 1 day.
That means as of today, he has officially been out of the womb for longer than he was in there.
The last few days I’ve been thinking about this and about how much has changed since he was born. It feels like I’ve never known life without him- but it also feels like he’s growing up faster than I can keep up with. The other day, I started having to toss his 6-9M clothes into the “donate” pile as I tried to dress him, and I told Hubby this. We looked at each other & realization set in for both of us- he’s almost 9 months old. He’s in a whole new age group now. Yes, we knew he was crawling {now both forwards and backwards instead of just backwards! Score!}, standing, talking, laughing, and eating Stage 3 foods, but we weren’t ready for him to be “9-12 months” old. Which he will be on the 13th.
Hitting this 37 weeks & 2 days milestone makes me think back to my pregnancy. Which sucks, because I was miserable the whole time I was pregnant. Not because of Shane- I was very excited and never for a moment unsure about having him. However, I’m pretty young. I was in a sorority when I was pregnant- that’s pretty awkward. I look younger than I am- people at maternity stores, the OB’s office, etc. decided it was their duty to tell me I was too young to have a child; although when they learned I was 20 (at the time) they changed their minds and told me they had thought I was 16. This isn’t an MTV show, y’all. &I also lived with my dad up until I was almost 8 months pregnant- which was embarrassing because I was afraid of my neighbors thinking that I was just another knocked up teen. {Disclaimer: I totally feel for those who ARE “another knocked up teen.” Things happen. I don’t look down at these women- but I wasn’t one and I was sick of people judging me for something that wasn’t even the case.} So anyway, add all those downers to the physical pain I was in {I had a rough pregnancy} and I was just SO over it and ready to have him.

{on the way to the hospital to have him- this is my “OMG my vagina will never be the same” face}
Luckily, Shane knew this & was born at 37 weeks and 1 day, like I said, just one day past the “premature” clearance zone. He was a perfectly healthy 6 lb. 15 oz. baby- but I’ll save his birth story for his birthday. For now just suffice it to say- I’m so glad I’m not pregnant anymore.

{Shane at 1 day old}
Some things haven’t changed since having Shane though:
-I still have a ton of stretch marks on my stomach…. a ton
–I’ve still got some loose skin at the bottom of my stomach from where it stretched and now shrank
-I’m still nursing him, so I still have to deal with nursing pads, leakage and avoiding engorgement
-I still have a lot of back pain and have to use IcyHot on it to fall asleep at night.
-I’m yet to start ovulating again thanks to the amazing combination of nursing & mini-pills. 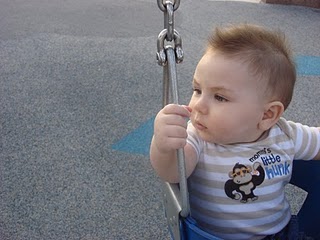 {At the park last week}
But lately, things have been changing.
-My milk supply has been steadily decreasing- I am never “full” anymore.
-My nipples have finally gone back to the peachy pink color they were before.
-I can use my stomach muscles again- I can finally suck in, do crunches/sit-ups, etc.
-My arms are becoming more defined from carrying around a 20 lb. child all day.
-My hips, while they’ve remained wider structurally since pregnancy, are thinning out and no longer holding on to the “baby weight”.
-My C-Section scar is a light red instead of the dark purple it’s been for months.
-&The scary part: I’m beginning to forget how insanely difficult being pregnant was. My body is doing that hormone thing where it erases all memory of the pain, agony and frustration of having to sleep with 8 pillows in a specific pattern in order to fall asleep; of having to do a three-point-turn to get out the door; of realizing your shoe is untied and there’s nothing you can do about it but hope that when you inevitably fall, it’s not on the baby.

{Lil’ Blue Eyes}
With each of these things going back to normal, I grieve for a moment or two about that part being over. The other day when I was thinking about it, I caught myself with my hand on my stomach, reminiscing about when Shane would kick my hand and I would be thrilled.
Now, he punches me in the face.
I’m not nearly as thrilled.

{Nom nom}
I guess what I’m saying is that I’m just so happy to be done with pregnancy and be able to hold my son in my arms whenever I want- but I miss the closeness that comes with having your child inside of you, growing and being nurtured by you. I miss it, but at the same time, there are so many new ways to be close to Shane that I’m ready to keep going forward… and take my birth control religiously.