Never, ever buy on sale….

Plastic surgery
I don’t care if it’s buy one-get three free; that’s how you end up like Heidi! Any reputable surgeon will not offer discounted surgery. Even “minor” procedures like Botox and chemical peels shouldn’t be purchased on sale since there’s a lot that can go wrong- and Hello! That’s your face on the line.

Haircuts
Unless you know the stylist, don’t risk it. If a stylist is offering cheap haircuts, there’s a reason- often, they can’t keep their clients coming back because they don’t like their hair cut. It’s hard enough to stand up for yourself if you don’t like the cut, but if you’ve only paid part of the price, you feel downright obligated to grin and bare it. Just like the plastic surgery, this is your appearance on the line. Don’t risk it! 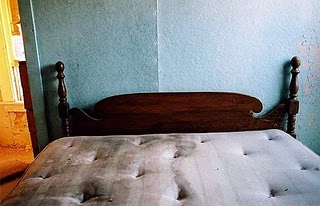 Alright, thinking about my own mattress makes me cringe. Think about all the icky stuff on there… drool, baby spit up, milk, formula, uhm… ya know. I don’t even want to lay in my own drool, let alone someone else’s! &Don’t even get me started on bed bugs… Sometimes, even getting something for free is too expensive. This is one of those situations.
Lingerie & Swimsuits
I wish this went without saying, but you’d be surprised. First of all, lingerie is not comfortable. Therefore we can assume women only put up with it for a short period of time- during which some despicable things happen that should ultimately result in the burning of the lingerie, rather than the posting of it on eBay. And as for the swimsuits- styles change drastically every single year. Not to mention if it’s been used, it’s been exposed to chlorine and other chemicals that break down the composition of it and stretch it out. Oh, yeah, and for both lingerie and swimsuits- eew! Cooties!
Dog Beds
First of all, a used dog bed is a waste of money, since odds are your dog will not lay on it. A dog’s scent never goes away completely and your dog will smell the previous owner and know that the bed is their territory. Not only will that cause them to avoid sleeping on it, but will encourage them to pee on it in order to claim it as their own territory. Plus, you never know if the other dog had a flea or tick problem.
Hats
Kind of like how you don’t know if a dog had fleas, you don’t know if a person had lice. Plus, hats tend to get sweaty and then can get all germy and gross.

Cars
They really do lose a huge chunk of their value the second you buy them. This is because the collective consciousness is that someone wouldn’t bring back a perfectly good new car, and thus there must be something wrong with it. Your best bet is to get a used car- they often have used cars of the current year’s model!

Office furniture
Office furniture doesn’t take a whole lot of wear, and nothing gross happens on it (well, usually). However, desks are a huge pain to move, so you can almost always score one that someone doesn’t feel like moving with them on Craigslist or even Freecycle. I actually found a little coffee table in the dumpster next to my house the other day- I took it home, cleaned it up & am now using it as a craft station!

Pets
I’m an animal lover & I would like to suggest that if you are looking to add a furry, scaly, feathery or otherwise friend to your family that you check out your local shelter or various online rescue groups before heading to the pet store. I get choked up thinking about all the animals that get put to sleep just because they don’t have a loving family (cue the Sarah McLaughlin song..) so I won’t go on but seriously- adoption is the way to go. Still not convinced? Keep in mind that you’ll pay about $100 for a dog from the shelter, but about $2300 for a puppy from the pet store.

What are your musts for shopping? Do you have something that you want to add to any of the lists? Leave it in the comments!